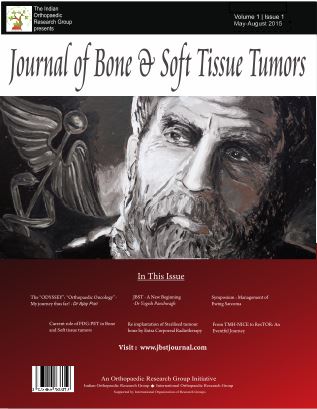 There appears to be some ambiguity surrounding interpretation of collaborating disciplines on how ‘Ewing sarcoma’ is named, written or spoken. And they mostly are pretty sure about their version (or probably unaware of any other version!). The article will focus on the issue of how Ewing sarcoma is quoted in literature and shed some light on origin of the term. This will also serve as an introduction to our symposium on Management of Ewing Sarcoma.
Keywords: Ewing Sarcoma, Name.

Ewing sarcoma was first described by Dr James Ewing in 1921 in his paper read at New York Pathological society proceedings [1]. In his paper he described a 14 year old girl with a bone tumor arising from radius shaft which was diagnosed to be osteosarcoma. Although osteosarcomas were known to be radioresistent, this particular patient underwent radiotherapy and to everyone’s surprise had a ‘miraculous’ response both clinically and radiographically. The tumor did recur but biopsy done this time revealed it to be distinct form osteosarcoma. Ewing described the cells as round using the loose term ’round cell sarcoma’. To him the cells appeared similar to cells of endothelium of the blood vessels of the bone and thus he described the tumor as ‘Endothelioma of the bone’. He further described 6 such similar patients. This tumor was named as ‘Ewing sarcoma’ few years later by Ernest Codman [Ewing sarcoma is the most common differential of Codman Triangle] [2]. Although Dr James Ewing has contributed a lot to medicine his contributions in estabilishing oncology as an independent science is noted by naming him as ‘The Cancer Man’ or ‘Mr Cancer’ by his colleagues and media. He is still best known to every student of medicine by the eponym of ‘Ewing Sarcoma’.

What’s in the Name?

Ewing sarcoma has been reported to be written as ‘Ewing sarcoma’, Ewing’s Sarcoma’, ‘Ewings’ Sarcoma’ or simply ‘Ewings sarcoma’. Which is the correct version? I came across this issue rather accidently on preparing and reviewing for this particular symposium. We have three articles in the symposium [3,4,5], one on radiotherapy, one on medical management and one on surgical aspect. There was difference in how these three manuscripts spelled Ewing sarcoma. The non surgical articles insisted the name to be ‘Ewing Sarcoma’ while the surgical article insisted on ‘Ewing’s Sarcoma’. So what is the correct nomenclature? On sarcomahelp.com site I found this description “The tumor which bears his name is generally referred to as Ewing’s sarcoma when spoken and either Ewing’s sarcoma or Ewing sarcoma when written [6].” I reviewed the policies about the eponymus words and found an interesting fact about them. A cold war is been fought between US and Europe with US wishing to phase out use of eponyms and is against creating any new ones [7]. The argument is that the disease is not ‘Owned’ by a person. They called the eponymus use with an apostrophe as a possessive case of the word that indicates that the person either had the disease or owned the disease. By that example Ewing’s sarcoma indicates that Ewing had the sarcoma! They advocated a non possessive use of the eponyms like ‘Ewing sarcoma’. Following the rule the AMA Manual of Style: a guide to authors and editors recommends use of non-possessive case for writing eponyms. Even if we ask word nerds in true grammatical sense an apostrophe does indicate possessive nature of the noun to which it is attached. On the other hand the European literature holds the eponyms in high regards as historical testaments to physicians who first described the diseases and advice to write eponyms with an apostrophe as in Ewing’s sarcoma. To support this there remains arguments regarding using non possessive case in certain diseases like replacing ‘Down’s Syndrome’ with ‘Down syndrome’ which will then imply that there is an ‘Up Syndrome’! The controversy still rages and anyone interested should read these two articles published in British Medical Journal [8,9].
But what about our question about Ewing Sarcoma? Searching pubmed, I could find 1021 article with Ewing sarcoma , 2147 articles with Ewing’s Sarcoma , 17 article with Ewings sarcoma and 9 articles with Ewings’ sarcoma respectively in their titles (Fig 1 a-d). Thus most of them were divided into either possessive case or non-possessive case and possibly it depends on journal policy and geographical preference. Search of MESH (Medical Subject Heading) in pubmed identifies Ewing sarcoma as Mesh Major Subject Heading. I too would personally agree with non-possessive case [also as per AMA Style and Pubmed MESH term] in form of ‘Ewing Sarcoma’ although authors may choose other versions too. However when one of the version is used, authors should use the same version consistently throughout the manuscript. In this symposium we have used the non-possessive version in medical management and radiotherapy articles while a possessive version is used by the surgical focussed article. We hope the symposium is informative and any queries that remain in readers mind are welcomed as ‘Letter to Editor’ and will be answered by the respective authors. 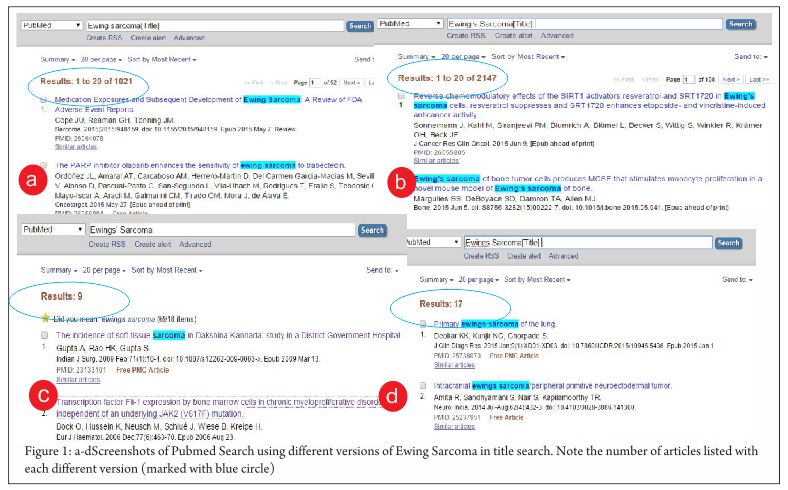