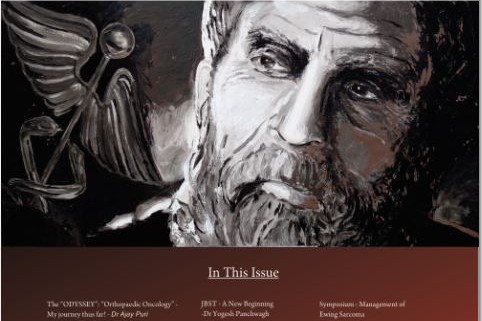 Systemic combination chemotherapy protocols have significantly impacted the survival rates in paediatric osteosarcoma. A number of drugs have been found effective and high dose methotrexate (HDMtx) is of them. The clinical data available on use of HDMtx is still not clear about the effectiveness and metanalysis have found that evidence is still inadequate to recommend routine use. Few studies have strongly reported improved survival rates with high dose methotrexate and this led to more trials using the drug in standard treatment arm. However there are other studies that have failed to show any survival advantage. In this review we discuss the biology of osteosarcoma with relevance to Methotrexate, clinical trials evaluating the use of High dose Mtx in treatment of OS and recommendations based on available evidence.
Keywords: Methotrexate, Osteosarcoma, Evidence.

The introduction of systemic combination chemotherapy has dramatically improved the survival of pediatric osteosarcoma (OS). Various combinations of chemotherapeutic agents have been tried by different study groups and centres and the common agents that have emerged as effective are Adriamycin, cisplatin, Ifosfamide, Etoposide and High does Methotrexate. The overall survival using various combinations of these agents have more or less been similar. The role of methotrexate in treatment of pediatric OS has been a contentious issue even after decades of its use. Methotrexate (Mtx) was introduced in the 1960s by for treatment of osteosarcoma by Norman Jaffe and has been a standard component of chemotherapy for pediatric OS. However evidence for high dose Mtx having an independent impact on survival is controversial. In this review we discuss the biology of ostesarcoma with relevance to Mtx, clinical trials evaluating the use of High dose Mtx in treatment of OS and recommendations based on available evidence.

Biological rationale for the use of High dose Methotrexate (HDMtx)
Methotrexate is a structural analog of folic acid that binds to dihydrofolate reductase (DHFR), and inhibits the folate metabolism in tumor cells. Polyglutamylated form of Mtx is retained in the cells better and it effectively blocks DHFR. Methotrexate is transported into the cell by the folate receptors, the reduced folate carrier (RFC), and the proton coupled folate transporter, out of which the RFC is the most relevant. Osteosarcoma tumor cells show one or more sequence alteration in the RFC gene or decreased RFC mRNA expression. Increased DHFR mRNA expression is also common ,especially in metastatic disease. These mechanisms cause OS tumor cells to be inherently resistant to standard doses of Mtx [1]. However this resistance can be overcome with higher than standard dose of Mtx which may allow transport through alternative means, such as passive diffusion and by prolonged drug exposure. Doses of 8gm/sq.m to 12gm/sq.m of Mtx are usually used in most protocols.

Evidence from Clinical trials
The data from clinical trials regarding the effect of HDMtx on survival have been ambiguous. HDMtx was incorporated as a standard component of therapy without the rigorous evidence from randomized control trials, mostly based on experience from single centre cohorts. Bacci et al demonstrated that patients receiving HDMtx had higher overall survival rates at 5 years. For patients receiving HDMTX therapy a rate of 58% was reached versus 42% for patients treated with intermediate dose MTX. MTX levels after HDMtx administration had a significant effect on survival [2]. Complete remission rate at surgery was related to serum levels and at levels below 700 micromole/liter complete remission rates were 9.9% while it was 28% at higher levels. Another randomized trial compared doxorubicin/ Cisplatin versus HDMtx with reduced dose doxorubicin and cisplatin. Disease-free survival was inferior in patients who received the 3 drug arm but overall survival was not significantly different between both treatment arms. However, the intensity of administration of MTX was compromised by the design of the study [3]. Non-methotrexate containing chemotherapy was found to be a poor prognostic factor in some studies [4]. There also have been studies which failed to show any survival benefit with HDMtx containing regimes. A randomized study conducted by the Children’s Cancer Study Group comparing HDMTX and intermediate dose Mtx in combination with doxorubicin and vincristine as adjuvant therapy did not show any benefit of HD- Mtx [5]. The results from St.Judes OS99 trial in which all patients were treated with a 3 drug non-methotrexate regimen consisting of carboplatin ,doxorubicin and Ifosfamide had favorable outcomes compared to HDMTx regime used previously by the same group [6]. The European Osteosarcoma Intergroup (EOI) compared a 2-drug regimen (doxorubicin, cisplatin) with a multi-drug regimen (HDMtx, doxorubicin, bleomycin, cyclophosphamide, dactinomycin, vincristine, cisplatin) and no difference in survival between the 2 arms was seen [7]. The frequency of MTX dosing was decreased to allow the administration of doxorubicin when compared with the multi-drug scheme similar to the T-10 Rosen scheme and with the presence of other active drugs the contribution of HDMtx was difficult to demonstrate. Attempts to enhance the efficacy of MTX-L in osteosarcoma by extending the period of administration from 4 or 6 hours to 24 hours or prolonging the interval before initiating the rescue program have not been successful. Administering a high Mtx dose by the intra-arterial route, which produces a higher local concentration, also did not enhance the efficacy.

Considerations for the Clinic Administration of High dose Methotrexate
HDMtx administration when done in centres with adequate expertise has a good safety profile. Diligent monitoring of hydration, urine pH, renal function and serum methotrexate level monitoring are absolutely needed for HDMTx administration. Protocols have to be written down, staff should be well trained and supervised in such centres. Leucovorin rescue by administering folinic acid intravenously based on serum methotrexate level monitoring is the key to successful HDMtx therapy. Algorithms to calculate leucovorin dose based on serum methotrexate levels and time interval following Mtx administration must be used. Hydration also has to be continued till the serum Mtx levels have decreased to less than 0.1 micromol/L to 0.3 micromol/L. Drugs like penicillins , NSAIDs which interfere with Mtx excretion must not be used concomitantly. Use of carboxypeptidase should be considered if serum methotrexate concentration is >10 micromol/L more than 48 hours after methotrexate administration or if there is a rise in creatinine of 100% or more within 24 hours of methotrexate. It reduces mtx levels dramatically within minutes of administration. Access to Glucarpidase when required is recommended.
HDMtx must be avoided in case of pleural effusion or ascites due to retention and slow release of Mtx .
Complications that can occur with HDMtx are renal failure, severe mucositis, myelosuppression and encephalopathy.

Mechanisms of Methotrexate Resistance in Osteosarcoma
DHFR gene amplification and impaired transport of Mtx are two common mechanisms of acquired resistance observed. Decreased RFC expression was associated with a worse histological response to preoperative chemotherapy that includes HDMtx treatment. Increased DHFR expression represents acquired MTX resistance and is an uncommon mechanism for intrinsic resistance [8]. Emergence of a resistant clone or acquisition of DHFR gene mutations could be the underlying causes. Rb gene mutations which are common in OS cause elevated E2F expression and is proposed to elevate the DHFR levels [9].

Challenges in developing nations
The scenario in developing nations like India has been gradually improving. But the survival rates are still low compared to the developed nations. There is a lack of data regarding treatment details and survival outcomes in pediatric OS. Most centres in India use Cisplatin/doxorubicin based regimes which do not contain HDMtx. In a yet to be published study from a high volume cancer centre in India, survival figures of pediatric OS treated with cisplatin/Adriamycin/Ifosfamide chemotherapy the overall OS and DFS were 54.6 and 43.4 respectively at 3 years (personal communication). The DFS was 0% at 3 years for patients with metastatic disease at presentation. Similar experience is shared by other centres in the country using non-methotrexate regimes.
Though it is tempting to consider addition of HDMtx in such a scenario , the limited resources in developing nations precludes its routine use for pediatric OS. Lack of facilities for Mtx level monitoring, high infection rates , underlying malnutrition, inadequate supportive care facilities makes it difficult to administer HDMtx to most of the pediatric OS patients in India.

Current recommendation
Based on available studies a Cochrane meta-analysis concluded that data is inadequate to make a definite recommendation for HDMtx [10]. It seems unlikely that there will be in the future any large RCTs to unequivocally establish the superiority of HDMtx. Despite this, HDMtx is an essential component of standard arms of ongoing trials. The recent EURAMOS trial has 12gm/sq.m of Mtx in the neoadjuvant chemotherapy phase for all patients [11]. Absence of RCTs should not dissuade the addition of HDMtx, especially in centres which have poor outcomes with non-methotrexate chemotherapy regimes. Addition of HDMtx may provide an edge over existing chemotherapy and should be attempted , provided that the prerequisites for HDMtx therapy as discussed above are available. One approach could be to try HDMtx for high risk OS patients first and based on the experience gathered, treatment may be extended to standard risk patients as well.