Introduction: The overall survival rates for non-metastatic osteosarcomas have dramatically improved from a mere 15-20 percent to 60-65 percent today. This was possible due a multifactorial improvement in all the disciplines and specifically the advent of multiagent chemotherapy. With an exponential increase in the survival as well as limb salvage procedures, it would be customary to invent cost effective, stable, durable reconstruction options. Various biological and non biological methods are available for reconstruction. In the era of metal and with the advent of growing artificial bones, non biological options appear to be an attractive and easily available option with excellent immediate results but their long term results and complications are debatable. On the other hand the less attractive biological methods are known to provide stable, durable, cost effective reconstruction options. In the present article we discuss various biological reconstruction methods available for extremity osteosarcoma patients, their advantages and disadvantages.
Keywords: Biological reconstruction , Osteogenic sarcoma

The era when osteosarcomas of the extremity were treated with only amputations is long past and the advent of multimodality management has completely changed the outcomes of these tumors. With newer chemotherapic agents, modern surgical techniques, better imaging techniques and affordable reconstructive options limb salvage has become the norm resulting in better functional and psychological outcomes The prerequisites for limb salvage include the ability to achieve an oncologically safe margin and ability to reconstruct the limb such that it provide better function compared to an amputation. Today this is possible in more than 95 percent of the patients [1].
Adequate oncologic clearance is paramount and the chosen method of reconstruction should never compromise the amount of resection required. The barriers to limb salvage are encasement of a major motor nerve, major vascular involvement, poorly placed biopsy incisions, uncontrolled infection, displaced pathological fractures and inadequate motors after resection of tumors.
Besides fulfilling the basic pre requisites of limb salvage mentioned above the reconstructive modality chosen should permit an early return to daily activities and be aesthetically acceptable. . The reconstruction must be durable, economically feasible and should have minimum short term and long term complications. A number of reconstructions methods, both biological and non biological are available for the reconstruction of these skeletal defects after resection. The chosen method of reconstruction should be tailored for the individual based on the growth potential, site and amount of resection and functional requirements. This article discusses the biological techniques available for reconstruction of bone defects after resection of an extremity osteosarcoma.

Biological methods available for reconstructions are
A) Allografts
B) Autografts – vascularised and non vascularised
C) Patient’s own sterilized tumor bone
D) Combination of allografts/ sterilized tumor bone and vascularised autografts
E) Distraction osteogenesis with Ilizarov technique
F) Rotationplasty
G) Masquelet technique
Depending on the extent of the resection, the surgical resections can be categorised as Osteo-articular resections and Intercalary resections. Reconstruction after osteoarticular resections is mainly done by megaprosthesis (non biological). If you want to retain joint mobility the biological options available are limited to osteoarticular allografts. Though these maintain bone stock and provide a better attachment for surrounding soft tissue resulting in increased stability of the construct the long term results with osteoarticular allografts are disappointing .Fracture, arthritis, non unions, infections and repeated surgery are not uncommon. Studies have reported 60-70 percent adverse events, overall 5 year survival of 69 % and 79 % for allograft and articulate surface respectively[2,3]. A composite of allograft and prosthesis has been widely used, where allograft helps to maintain the stock and prosthesis provides the articular surface [figure 1]. The functional outcomes with composite reconstruction are comparable with prosthetic reconstruction alone but associated with higher complication like nonunion and fracture. This method can have limited use in selected young patients with expected long term survival and require good bone stock for revision surgeries [4,5,6].
Allografts require sophisticated bone banks for procurement and storage and these are not available in most of the developing countries. Bone donations are not as frequent as other organ donations making procuring of size matched allografts even more challenging. Allografts may also be associated with risk of transmission of disease. 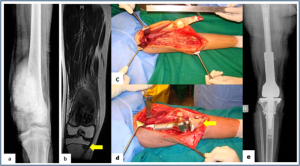 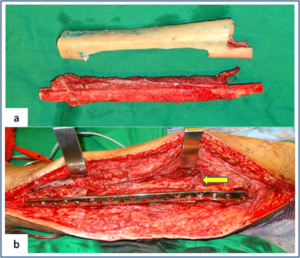 Though strut allografts alone can be used for the reconstruction of intercalary defects and knee arthrodesis but studies have shown higher rate of complication like fracture, non union and resorption of grafts. Study by Bus MP et al has demonstrated a complication rate of 76 % and 70 % chance for reoperation due to graft failure. Thus strut allografts alone have limited use and are generally preferred for the upper limb or small defects (< 15cms). To overcome the above complication strut allograft may be combined with vascular fibular grafts [7,8].
Fibula is the most widely used autograft for reconstruction. It can be used as a vascularised or non vascularised graft. Proximal fibular head (with articular surface) has been used to reconstruct the articular surface of proximal humerus and distal radius. While isolated vascularized fibula may be adequate for reconstruction of upper limb defects where weight bearing is not an issue, lower limb reconstructions involving femur or the knee generally require a combination of vascularised fibula with strut allografts [figure 2]. Isolated use of fibula autograft or strut allografts have higher failure rates in large lower limb bone defects [9,10,11]. Small osteoarticular defects (up to 5 cm) like after the resection of distal radius lesions can also be reconstructed with iliac crest autograft. Certain anatomical sites have an inherent advantage and ease for reconstruction. Use of the neighbouring bone in forearm and leg provides a vascularised graft after resection of the radius and tibia. This serves as an easy and effective method of reconstruction. Shifting the distal ulna after an osteotomy at an appropriate level into the defect along with its soft tissue attachment and stabilizing it to the radius proximally and carpal bone distally (wrist arthordesis) provides an excellent method of reconstructing the bone defects after resection of distal radius tumors[figure 3]. This method provides a stable wrist while maintaining forearm rotations (pronation- supination)[12]. Similarly in tibial lesions the fibula is mobilized medially into tibial defect and stabilized. This can be done both, for intercalary resections of the tibia where fibula is shifted after a double osteotomy and distal intrarticular resections where the transposed fibula is stabilized to talus to create an ankle arthrodesis This procedures avoids the requirement of a complex micro vascular procedure, reduces the operative time and also facilitates ease of soft tissue closure as transportation of fellow bone in to the defect will result in volume reduction of the tissues [13]. 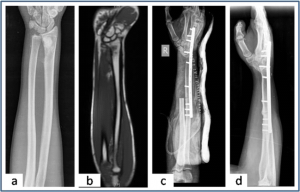 Reimplanting sterilized tumor host bone is widely used after intercalary resections. Patients own resected bone is sterilized and used to fill the defect. The resected tumor grafts can be sterilized by various methods like radiotherapy (extra-corporeal radiotherapy), pasteurization, autoclaving, liquid nitrogen and microwave.
This technique has various advantages over the use of allograft. It does not require a bone bank, provides size matched graft (as it has been taken from the same defect) and has no risk of transmitted disease. After resection of the tumor the tumor bearing bone is taken on a separate table and soft tissues are removed under aseptic precautions. Certain soft tissues like ligaments may be retained on the bone graft in order to facilitate reconstruction. Sterilized bones are implanted back in the defect and stabilized with intramedullary nails or plates [figure 4]. Reimplanted bone acts a scaffold for creeping substitution and incorporation. To enhance incorporation and the union at osteotomy sites they can be combined with a vasclarised fibula ( Capanna technique). Puri et all documented a mean union time of 7 months for osteotomy sites and an excellent MSTS score of 29 with extracorporeal radiotherapy [14,15]. To overcome the adverse events like nonunion, fracture and collapse with the use of liquid nitrogen to sterlise tumor bone (fresh frozen autograft), pedical autograft technique was developed. In this technique an osteotomy is done at one end or joint disarticulation done and the whole specimen is treated with liquid nitrogen with other end in continuity with the main bone. It is then stabilized back with internal fixation or athroplasty. As bony continuity is maintained at one end, it is presumed to have early blood flow recovery and faster union and less complication compared with frozen autograft [16,17]. The main drawback of sterilized bones are inadequate mechanical strength resulting in graft fracture and implant failure. To enhance incorporation and to overcome inadequate mechanical strength they can be combined with a vasclarised fibula ( Capanna technique). 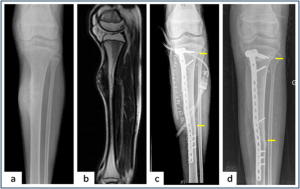 For surface lesions like periosteal, parosteal and high grade surface osteosarcomas where medullary canal is not involved, bone preserving hemicortical excision may be considered. Meticulous planning with MRI and CT scans are required to obtain adequate margins and preserve good native bone. Computer assisted navigation surgery is advantageous while performing such technically demanding bone preserving surgeries. Various options are available to fill the bone defect after hemicortical excision (sterlised resected bone, strut allografts or small defects can be filled with autografts) [18,19].
Rotationplasty involves converting ankle joint to knee joint by segmental resection and rotating the foot externally to 180 degrees. This is an alternative method for reconstruction especially in children with growth potential where cost constraints may preclude the use of expensive growing prosthesis. This worthies also useful in converting hind quarter or above knee amputations to a functional below knee like amputation in adult patients where conventional resection and reconstructions are not possible due to large or previously inappropriately treated lesions In distal femur and proximal tibia lesions, a segment of involved bone along with knee joint and involved soft tissues is removed only sparing the neurovascular bundle. Here the two segments are connected only with neurovascular bundle. The distal fragment is externally rotated 180 degrees and distal part of femur is stabilized to proximal tibia with appropriate implants, in such a way that the ankle comes to the level of opposite knee joint. In the cases with involvement of whole femur, proximal tibia is articulated with the hip joint with or without use of prosthesis after external 180 dgree rotation. Adequate soft tissue reconstructions and an intense rehabilitation protocol ensures an excellent functional outcome in these cases where the ankle will act like knee joint, dorsiflexion of ankle acts as flexion and plantar flexion acts as extension of knee joint [figure 5]. This procedure can also be used as salvage surgery following infected and failed limb salvage reconstruction. Studies have shown excellent oncological and functional outcome with this procedure. Rotationplasty offers a durable reconstruction option. It is not associated with phantom limb pain or sensations which are common following amputations. The main drawback of the procedure is the cosmetic deformity due to posterior rotated foot [20,21].
Distraction osteogensis using ilizarov method has been used for bone defects in tumor resection. It can be combined with live fibula grafts. The disadvantages are prolonged duration of treatment, high incidence of pin tract infections due to immune compromised state of patient receiving chemotherapeutic agents [22,23]. Due to these complications it is not a popular method and is used rarely. 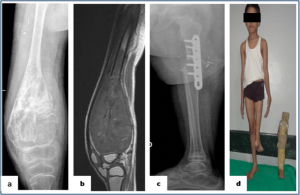