Purpose: The schwannoma is a benign tumor and is known to be the most common type of tumor of the peripheral nerve sheath. They are known to arise from the nerves of the head and neck; however, outside this region, it is found more often in the upper extremity, and if occurring in the lower extremity, is likely found in the posterior tibial nerve. Schwannoma of the sciatic nerve is considered a very rare entity, accounting for only 1% of all schwannomas, with an estimated incidence of about 6 cases per million individuals.
Methods: In our literature search, it is noted that they are more likely to arise from the proximal aspect of the nerve, as it exits the sciatic notch, presenting as a mass in the proximal thigh. This case reports tackles an even more unusual presentation of this tumor, occurring adjacent to the bifurcation of the sciatic nerve.
Results: A 46-year- old male presented with sharp, shooting pain from the back of his thigh to the plantar aspect of his left foot of 2 years duration. Patient was initially diagnosed as a case of plantar fasciitis and hamstring tightness that was managed conservatively. However, due to persistence as well as appearance of a small mass on the posterior thigh and positive Tinel’s sign over the mass, patient underwent work-up and subsequent surgery.
Conclusion: Due to its presentation that closely mimics sciatica of a lumbosacral discal pathology and other musculoskeletal disorders, these are often diagnosed and managed late. Despite its rarity, it should be suspected in patients with history of radicular pain without any neurologic deficits, which is poorly controlled by analgesics and supportive therapy, with physical examination pointing to a localized neural pathology.
Keywords: Schwannoma, sciatic nerve, bifurcation. 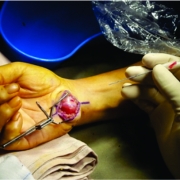 Role of Intraoperative Nerve Stimulator? In a Case of Ulnar Nerve Schwannoma. A Case Report with Four-Year Follow-up and Review of Literature

Schwannoma in the Bifurcation of the Sciatic Nerve: A Case Report and Literature Review

A Giant Gluteal Mass in a One1-Year-Old: A Case Report on Pediatric Lipobla... Treatment of GCT of Distal Radius Bone with Pre-operative Denosumab Plus Replacement...
Scroll to top
%d bloggers like this: