Introduction
Osteosarcoma is a high grade, primary tumour of bone in which the tumour cells produce osteoid [1]. It is the most common primary bone tumour, with an annual incidence rate of 5.0 per million [2]. Osteosarcoma is predominantly a disease of the young with a peak incidence in the second decade and displays a male predominance which is most pronounced at a younger age [3]. The treatment of osteosarcoma is challenging. The use of neo-adjuvant chemotherapy regimes combined with surgical resection has led to an improvement in outcome. Nevertheless, despite recent advances in surgical technique and chemotherapy agents, the survival rate has plateaued over the last 30 years [4]. There has been much research into prognostic factors that may help predict outcome in osteosarcoma, a number of these have been identified (see Table 1). Authors have suggested the most important, independent risk factors are the response to adjuvant chemotherapy and resection margins [5-7]. This review considers the impact of resection margins with a focus on limb salvage surgery and discusses the significance of response to chemotherapy. 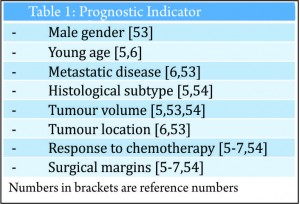 Resection margins
There has been much debate around the margin of clearance required for surgical treatment of osteosarcoma.  Enneking et al. were the first group to formally stage osteosarcoma into three distinct grades according to biologic aggressiveness, tumour site and distant metastases [8].  The authors suggested this system be used in surgical planning and inform the use of marginal, wide or radical resection margins. Nonetheless the definition of marginal or wide resection remains subjective and may vary between surgeons or units and has never been objectively defined (Fig 1).  Kawaguchi et al. developed this concept by giving distinct numerical values for desired resection margin according to the grade to tumour suggesting a 2cm margin was required for low-grade tumours and a 3cm margin was needed for high-grade neoplasms such as osteosarcoma [9].More contemporary studies have failed to reach a consensus on a numerical value for an adequate resection margin. Li et al. reported there was no difference in local recurrence when wide (>5mm) margins and close (<5mm) margins were used [10]. Bispo et al. failed to detect a difference in local recurrence using a margin of 2mm [11]. Betrand et al. found surgical margin to be the only independent risk factor for local recurrence and suggested a margin of 1mm may be adequate [12].  These papers suggest resection does not require a strict numerical margin, however efforts should be made to ensure no margins are intralesional. However, international consensus is in equipoise regarding margins, and this has made interpreting research articles very difficult. Even within units, tumour clear margins and ‘wide’ margins have become interchangeable when in reality they may be completely different and may lead to inappropriate treatment for patients. In the oncological world, the concept of patient specific treatment or ‘personalised medicine’ is gaining popularity and what is correct for one patient, may not be suitable for another patient, even with the same tumour type. 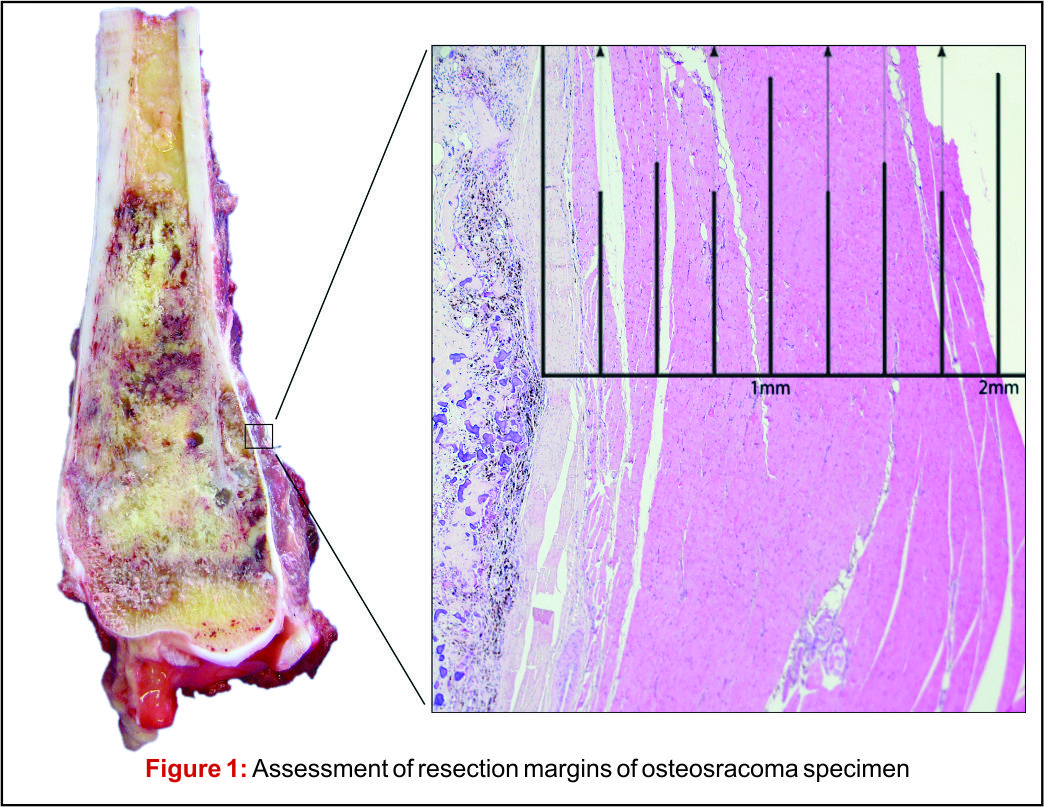 Prior to the advent of effective chemotherapy, the surgical treatment for osteosarcoma involved early radical amputation or disarticulation of the affected limb. Whilst ensuring complete removal of the tumour, performing this radical surgery on young patients caused loss of function and permanent disability, without improving patient survival. Limb salvage surgery (LSS) aims to resect the tumour, whilst maintaining function of the preserved limb, all with minimal risk to the patient (Fig 2).

The emergence of efficacious chemotherapy regimes, which acted to reduce tumour burden and reduce metastatic spread, and enhanced imaging techniques such as CT and MRI have led to the increased use of LSS [13-15]. By definition, the use of LSS requires preservation of limb neurovascular structures and narrower surgical margins when compared to amputation. Preservation of tissue during tumour resection has led to the inevitable decrease in resection margins, which potentially risks causing an increase in local recurrence (Fig 3). There are conflicting reports on the rate of local recurrence in LSS with some studies reporting an increase [15-17] and others a decrease [18], when compared to amputation. Considering local recurrence is associated with poor outcome, much work has been done to examine the impact of LSS on survival. Simon et al. were one of the first groups to investigate outcomes following LSS in a multi-centre retrospective review of 227 patients. They reported LSS had a comparable survival rate with amputation at 5 years follow up [19] and provided the impetus for increased uptake of LSS amongst surgeons. A large study by Bacci et al. retrospectively compared the outcome in patients who underwent LSS to amputation. The authors report that whilst LSS was associated with reduced resection margins, local recurrence and 5-year disease free survival were comparable to amputation [20]. These results are confirmed by a number of other groups, with each describing a survival rate equal to or better than that of amputation [15,17,18,21-27].It is important to consider, however, these studies are limited by their retrospective nature. Without robust methods of randomisation, treatment decisions have been based on individual patient and tumour characteristics, local practice and patient choice, leaving them open to the influence of selection bias. Postoperative quality of life is an important outcome measure in osteosarcoma. As patients with osteosarcoma are young and can expect a prolonged period of survival following treatment, the demands put upon a salvaged limb or prosthesis can be great. It is essential, therefore to ensure there is minimal risk of technical failure, the limb provides adequate function for the individual patient and has an acceptable cosmesis for both the patient and their care givers. Measurement of quality of life in children is difficult and there have been relatively few studies assessing this outcome measure. Using objective quality of life scores, LSS and amputation groups report reduced quality of life compared to population norms [29,30]. A meta-analysis comparing quality of life in patients who underwent LSS and amputation found there was no significant difference between the 2 groups. Taking into consideration all the above evidence LSS remains a safe and effective management option and when used in combination with adjuvant chemotherapy offers a good survival outcome.

The introduction of chemotherapy regimes alongside surgical resection has led to a dramatic improvement in survival. The use of chemotherapy in the treatment of osteosarcoma began in the 1970s with the use of doxorubicin and high dose methotrexate regimens [31]. Administration of chemotherapy agents before surgical resection as neo-adjuvant therapy enhanced survival from10 – 20% to 70% [32].Current modern chemotherapy regimes are based on combination therapy using methotrexate, adriamycin/doxirubicin and cisplatin. Poor response to chemotherapy has been identified as an important independent risk factor for poor prognosis. Histological evaluation of surgical resection specimens permits the classification of response to chemotherapy as good (>90% tumour necrosis) and poor (<90% tumour necrosis). Patients who display poor response are consistently reported to have worse outcome [33,34]. A number of strategies have been employed to improve results in poor responders. Evidence suggests modification of chemotherapy regime may improve results. Several groups have showed intensification of pre-operative chemotherapy enhances tumour response [35-37] and may improve survival [38-40]. This benefit however, is limited and intensification of chemotherapy beyond a certain level does not improve outcome [36,41-43]. The use of high dose, intensive treatment to induce a good response early in the disease process has also been shown not to convey overall survival benefit [38,42-44]. Further work is therefore required to optimize tumour response and improve outcome in patients with poor chemotherapy response. A recent, large, multi-national study EURAMOS-1 investigated the effect of adding the additional agents, ifosfamide and etoposide, to salvage poor response to chemotherapy, as well as evaluating the addition of pegylated interferon for good responding tumours [45]. The published initial results suggest that the addition of interferon for good responding tumours appears beneficial, however, it was poorly tolerated and frequently refused by patients. Current practice involves assessing tumour response using resection specimens following surgery, after the completion of neo-adjuvant chemotherapy, to advise further treatment[45]. Considering tumour response to chemotherapy is such a significant prognostic factor, measuring response early in the disease process may inform further management choices. Non-invasive imaging techniques such as CT [46], MRI [47-49] and F-FDG PET [50,51] have all be used to investigate response to neo-adjuvant chemotherapy. A combination of F-FDG PET and CT (F-FDG PET-CT) scanning is widely used for the detection of many cancers. Meta-analysis of the current evidence for its use in osteosarcoma has shown F-FDG PET-CT to be a valuable modality to assess chemotherapy-induced necrosis [52]. Newer techniques for evaluating response to chemotherapy prior to surgery, such as functional MRI (fMRI) are also promising and may inform surgeon’s decisions in planning surgical margins.
Patients with poor response to chemotherapy present a complex management challenge. There have been few studies presenting evidence to guide the surgical management of these patients. Bacci et al. suggested that amputation should be considered in the setting of poor response to chemotherapy due to its significant correlation with local recurrence rates [20]. Recent work in Birmingham investigated the influence of resection margins on survival in patients with poor response to chemotherapy [28]. The authors showed there was no survival benefit gained from amputation when compared to LSS with close margins, irrespective of the risk of developing local recurrence [28]. These data demonstrate resection with preservation of the limb to be a safe surgical option even in patients with poor chemonecrosis.

Predicting outcome
The current classification systems used to grade osteosarcoma, pioneered by Enneking, incorporate tumour characteristics including the presence of metastases to guide surgical management and predict prognosis [8]. However, despite the widely accepted importance of response to chemotherapy in prognosis, the current classification fails to reflect this.  In a recent presentation at International Society of Limb Salvage (ISOLS 2015), Jeys et al introduced The Birmingham Classification, which uses numerically defined tumour margins and response to chemotherapy to predict both local recurrence and survival. In this series, chemotherapy response was reported to show a significant effect on the rate of local recurrence and overall survival. It was also reported that a margin of 2mm was a statistically significant cut off value for predicting local recurrence.  Furthermore, combining resection margins (greater or lesser then 2mm) with response to chemotherapy (good, >90% or poor, <90%) was more effective in predicting local recurrence and survival than other staging systems.  This classification, however, requires further validation on a multi-centre basis.

Osteosarcoma continues to present a number to treatment challenges. Although surgical resection margins are an important predictor of outcome, limb salvage surgery with close margins has been shown to be a safe and effective surgical option.  Response to chemotherapy is an important independent predictor of survival.  A distinct group of poor responders exist, who despite modification to chemotherapy regimes and complete surgical excision of the tumour continue to have a poor outcome.  Current classification systems have so far failed to reflect important prognostic indicators, the Birmingham Classification represents a new, robust system for classifying osteosarcoma and predicting outcome.