Ewing sarcoma is one of the common primary bone sarcomas affecting patients mostly in the second decade. Appropriate clinical examination, investigations, staging, biopsy and multi-modal treatment are essential for good outcome. Neo-adjuvant and adjuvant chemotherapy have shown definite benefits in local and systemic control and in improving survival. Though historically, emphasis of treatment was on radiation, non metastatic Ewing sarcoma is shown to have better outcome with surgical excision as compared to definitive radiotherapy. Limb salvage surgery is currently the norm given the excellent functional outcomes. Various reconstruction options are available depending upon the age, site and size of the lesion. Appropriate follow up is essential to pick up local and systemic failures early. Individualized approach may be required for patients who are metastatic at presentation.
Keywords: Ewing sarcoma, Surgery, Limb salvage, reconstruction.

Ewing Sarcoma (ES) is a highly aggressive malignant tumor affecting mostly the immature skeleton, more commonly in the second decade of life. ES is named after Dr. James Ewing, a pathologist. Its aetiopathogenesis has evolved from “Endothelioma of bone” to a unique malignant tumor of bone with well described translocation t(11;22)(q24;q12) as a possible causative factor [1]. The classical pathology of small round blue cells makes it a part of the Round cell family of tumors, the other members of which are rhabdomyosarcoma, synovial sarcoma, non-Hodgkin’s lymphoma, retinoblastoma, neuroblastoma, hepatoblastoma, and nephroblastoma or Wilms’ tumor [2].

Clinical presentation
A high index of suspicion is required to diagnose a primary bony sarcoma like ES at a very early stage. The patients, typically in their first two decades of life, usually have a history of 2-6 months duration, of a painful, progressively increasing swelling in the affected area. Most of the patients give a concomitant history of trauma, which is coincidental. Some of the patients may have a history of fever [3,4].
Clinical examination reveals a tender diffuse swelling in the affected area. The range of motion of the adjoining joint may be terminally restricted. The palpation may reveal local warmth. Though the most commonly affected site is the diaphysis in the bone, ES is known to affect the metaphyseal region as well [3]. ES may affect any bone in the body (Fig 1 a-e). Periosteal ES located on the surface of bone and soft tissue ES, though rare, are well-defined clinical entities [3].
‘The clinical and radiological features in an ES of bone may be akin to osteomyelitis or an eosinophilic granuloma and these differentials have to be borne in mind and ruled out by subsequent investigations. 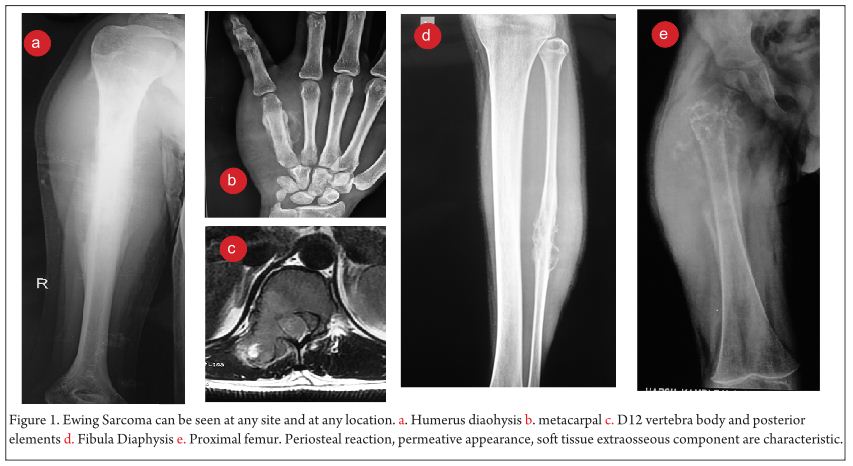 Work up:
The work up includes plain radiographs of the affected bone including the nearby joint, M.R.I. scan of the involved bone, and either a PET CT [7,8,9] or a CT Chest with Technetium Bone scan and a bone marrow aspiration biopsy [3]. The x ray ( Figure 1, a-e) usually shows a permeative, lytic lesion with lamellated periosteal reaction. In locally advance cases, an extra osseous soft tissue component is common [1,3,5]. A diaphyseal lesion may exhibit a characteristic “Onion peel” periosteal reaction. In some cases, “hair-on-end” or “sun-ray spicule” type of periosteal reaction may also be seen.
The laboratory investigations may reveal leukocytosis with elevated E.S.R. and C.R.P [3]. Serum levels of Lactate Dehydrogenase (S. LDH) are usually elevated and serve as a marker of disease activity and response to treatment [6].
These clinico-radiological and laboratory parameters are akin to osteomyelitis and it requires a trained eye with high index of suspicion to pick the neoplastic nature early in order to avoid mistreating these patients. MRI scan (Fig 2 ) has emerged as one of the most important radiological investigation amongst the others, in the work-up of primary bone sarcomas. It helps immensely in delineating the marrow involvement, revealing skip lesions if any, understanding the extent of soft tissue component and its relationship with the neuro vascular bundle, joint involvement and to decide the ideal site for biopsy. M.R.I. can also be used to assess response to neo-adjuvant chemotherapy [3,5].

Staging
Staging in a case of ES is of paramount importance because of its bearing on the overall prognosis and treatment decisions [1,3]. The conventional staging investigations included a C.T. scan of the chest, a three phase technetium mendronate bone scan and a bone marrow aspiration biopsy [3,10]. However, with the advent of P.E.T. C.T., the bone marrow aspiration biopsy is being found unnecessary [8,9].

Biopsy
The clinico-radiological suspicion of Ewing sarcoma has to be corroborated by a biopsy and pathological examination before further treatment is commenced. The biopsy of such a lesion is to be done preferably by the orthopaedic oncologist who will be treating the case, at a multi disciplinary cancer centre [3, 11, 13, 14, 15, 16, 17]. Most of the lesions are accurately diagnosed by a needle biopsy. Under the microscope, the tumor is arranged in sheets, nests or clusters of small round blue cells invading the native bone [1]. (Fig 3 a,b). The cells show dense blue chromatin with scanty cytoplasm and the contained glycogen is evident by the P.A.S. (periodic acid-Schiff) stain positivity. Immunohistochemical markers as CD 99 (a mic-2 gene product) and Fli-1 are diagnostic of Ewing sarcoma and are used as confirmatory tools [1,3].

Treatment
The treatment of ES is handled by a multi disciplinary team comprising of the orthopaedic oncologist, Medical oncologist, Radiation Oncologist, Pathologist and Radiologist [11, 12, 13 , 16, 17, 18]. The patient and the family need to be informed about the clinical results and the expected prognosis and have to participate in the decision making process. Flowcharts of both diagnostic work up and management protocol are provided in figures 5 and 6. The prognosis depends upon the metastatic status of the patient, with the non-metastatic patients having a better outcome [1,3].
The actual management of non-metastatic ES requires neo-adjuvant chemotherapy, followed by surgical resection (if feasible and indicated) followed by post op radiotherapy if necessary (OR definitive local radiotherapy) and then adjuvant (post operative) chemotherapy [1,3] .
In general, the local treatment outcome of an extremity ES is better with surgical wide resection than compared to definitive local radiotherapy alone [18]. In an axially located ES as in pelvis and spine, the decision regarding excision will have to be weighed against the morbidity of the surgery [19]. In a non-metastatic axially located ES, surgery or combined surgery and radiotherapy appears to have an edge over only radiotherapy; the latter being used only in unresectable tumors [20, 21, 22, 23].
The neo adjuvant chemotherapy helps in multiple ways. It is useful in downstaging the local disease, reducing the vascularity, controlling the micro-metastases, sterilizing the satellite lesions in the surrounding zone of hyperemia, helping formation of a thicker capsule, reducing the local edema, healing of pathological fractures and prognosticating outcome of the treatment based on the analysis of percentage necrosis in the tumor. All of these help in making the surgical excision easier and reduce the local recurrence rates [24,25,26,27,28,29,30,31].
The decision regarding limb salvage in a non-metastatic case of Ewings sarcoma is based upon the local extent of the disease. The status of the neuro-vascular bundle and amount of muscles involved by the soft tissue component, determine feasibility of a limb salvage surgery. The only absolute contra indication to a limb salvage surgery would be encasement of a major motor nerve in the extremity and inadequate muscles left after wide excision of the lesion, which would result in a non-functional extremity.
In a case that there are metastases at diagnosis, the decision regarding the approach is based on the number and type of metastases. In a widely metastatic case, only palliative treatment is offered. If there are few pulmonary metastases amenable to excision or are of doubtful significance, the patient is given neo adjuvant chemotherapy and re-staged. The decision regarding treatment is then based on the response to the chemotherapy. If there is progression despite the neo-adjuvant chemotherapy, palliative protocol is followed. If the metastatic lesions have responded to the chemotherapy then the local treatment decision can be taken accordingly with curative intent [25, 28].
The local control rates and the overall survival rates for patients of primary bone sarcomas treated with limb salvage and for those treated by amputation are comparable, with limb salvage surgery carrying better functional outcome [26,28,30,34]. In developing countries, it is worthwhile to offer limb salvage to patients who have a better prognosis, in whom the function of the salvaged extremity is going to be acceptable and for those who are willing to complete the necessary treatment and understand the complications involved.
The exact modality of reconstruction after limb salvage is decided by the site of disease, the extent, the patients age [11,34] and expectations and in the developing world, by the socio-economic status of the patient (Fig 4). For periarticular ES, reconstruction can be done by using megaprosthesis [34] or allo-prosthesis composite. This restores the function in the operated extremity fast, shortens the rehabilitation time post operatively, enables early resumption of adjuvant treatment modalities, is a durable option with acceptable complication rate. Arthrodesis can be an alternative to megaprosthetic reconstruction. In cases with diaphyseal involvement, joint sparing inter-calary resections can be done and the defect reconstructed using allograft – live fibula composite or only live vascularised fibula or extra corporeal radiotherapy and reimplantation [35,41]. Rotationplasty is a viable alternative for very young children [36] and in cases of failed limb salvage surgery [37].
The post operative margins of the resected specimen and the percentage necrosis after chemotherapy decide the need for post operative radiotherapy. In cases where the margins are inadequate or the tumor is viable, radiation is used post operatively in order to achieve better control rates [3,21-27,29]. The adjuvant chemo continues in the post operative period. [3, 4, 22, 23, 24, 25, 26, 27, 30, 31, 34].
Patients treated thus need to undergo the prescribed rehabilitation program in order to attain the maximum functional outcome [38]. Functional outcomes in these patients are measured by the Musculo Skeletal Tumor society scoring system (MSTS) or the Toronto extremity salvage score (TESS) [39, 40]. These scores basically reflect the ability of the patient to carry out activities of daily living.

Follow up
The patients are advised to follow up every 3 monthly in the first two years, every six monthly for next three years and annually thereafter. At every visit, radiographs and appropriate staging investigations follow clinical examination [3,25]. Fuchs et al have reported long term complications in 59% percent of patients treated for ES over a average follow up of 25 years [46]. These complications comprised of metastases, local recurrence, secondary malignancies, pathologic fractures, and radiation-associated and chemotherapy-associated morbidities. Hence it is recommended to follow all these patients over a longer period. 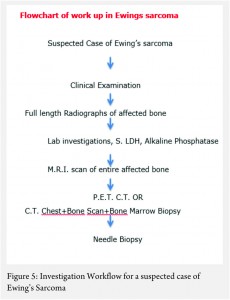 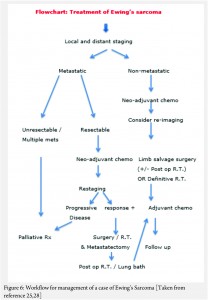 Results
In various studies, the overall survival (at 3 or 5 year follow up) for non metastatic ES has been reported to be between 43.5% to 80% [1,23,42-48]. The local recurrence rates are reported to be around 10% to 12.5% [44,48]. In long term follow up of an average of 18 years, Bacci et al have reported overall survival at 5, 10, 15 and 20 years as 57.2%, 49.3%, 44.9% and 38.4% respectively [45]. The poor prognostic indicators in a case of ES are presence of metastases (especially bone and bone marrow metastases), age older than 10 years, a size larger than 200 ml, more central lesions (as in the pelvis or spine), and poor response to chemotherapy [3]. New pharmacological agents and radiotherapeutical modalities are being investigated as discussed in the earlier two articles in the symposium [49,50] and possibility of imporving the survival and quality of life of patients with ES looks promising.

ES is one of the common primary bone malignancies. Appropriate diagnosis, staging, biopsy and treatment at specialized centers is essential for a good outcome. Treatment is multi modal with neoadjuvant and adjuvant chemotherapy, surgery with appropriate margins and radiation in adjuvant or definitive setting; all playing important role in achieving good overall survival rates. Limb salvage surgery in non-metastatic ES is now a norm. The survivors are prone to many long-term complications and need to be followed up for a longer duration. . 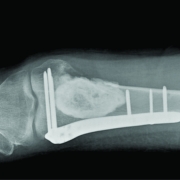 Desmoplastic Fibroma of the Distal Femur in a Young Man: A Rare Case Report 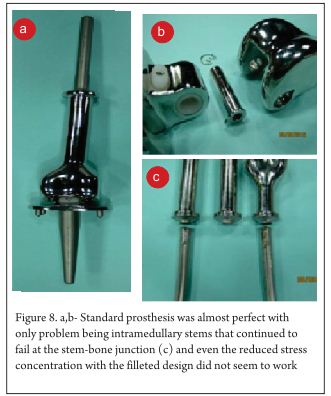 From TMH-NICE to ResTOR: An Eventful Journey A Treatise of developing a Tumor Megaprosthesis

Resection and Reconstruction of Calcaneal Tumors – A Review

Ewing Sarcoma: What's in a name? 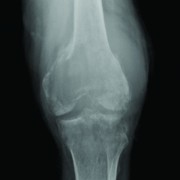 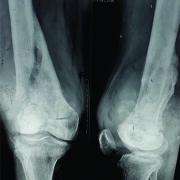 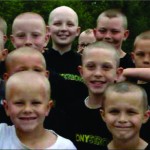